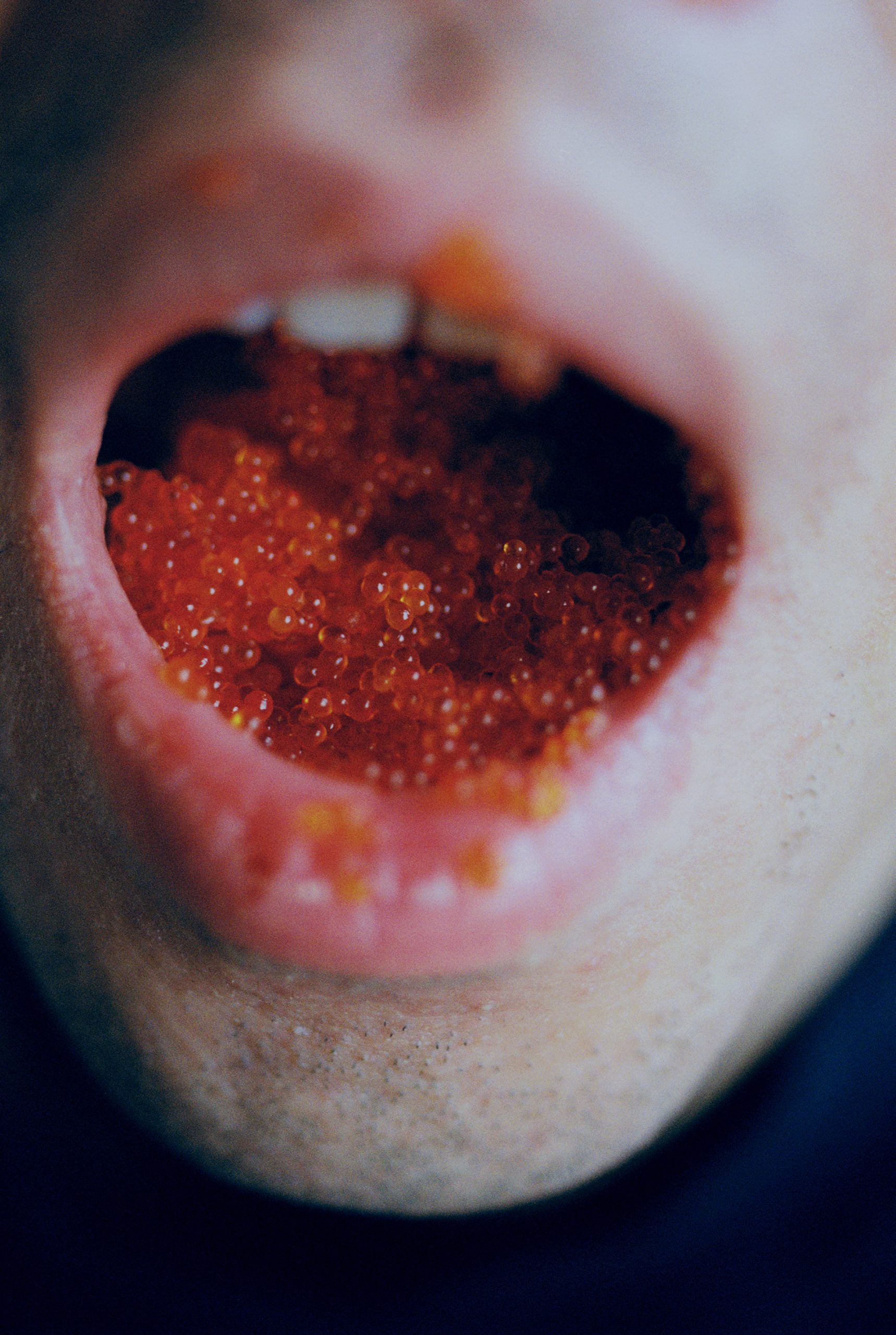 Labour in the Self Economy 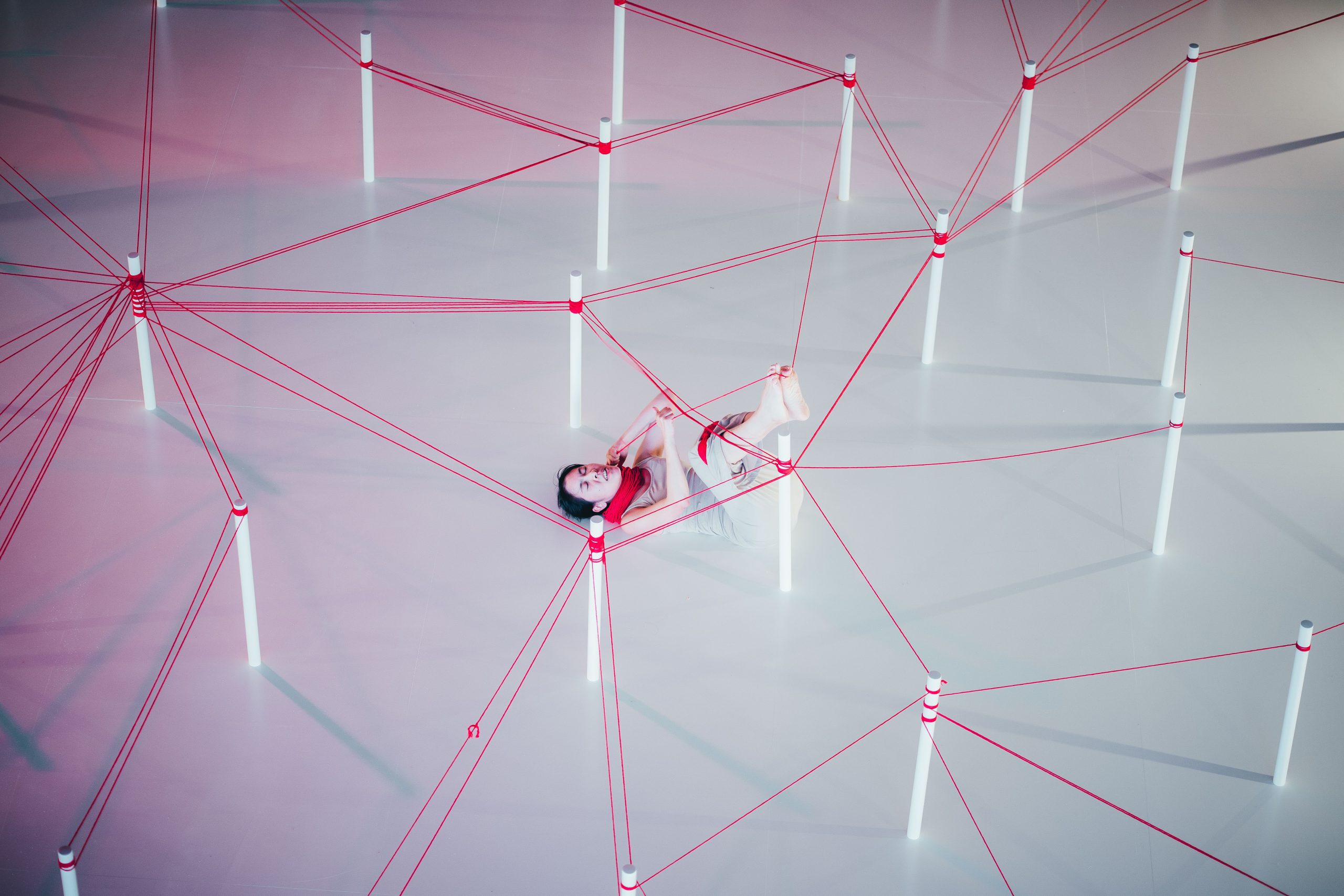 Kawita Vatanajyankur is an internationally renowned artist celebrated for her explorations of the physical and mental cost to labour in a late capitalist world. With a practice which spans across video, photography, and performance, her work deals with complex issues around exploitation of the body, the material and immaterial by-products of work, and the elimination of subjectivity in quest for ever increasing efficiency in contemporary society. Consistently, Kawita reflects on how individuals are directly and indirectly implicated in perpetual labour regimes, profit, efficiency, and exploitation in capitalist labour markets.

On Friday 22nd July Kawita performed Mental Machine: Labour in the Self Economy in the concourse of the Art Gallery of Western Australia (AGWA) to coincide with the inauguration of the Institute of Contemporary Asian Art founded by AGWA and the Simon Lee Foundation. Over the 45-minute performance audience members watched Kawita thread yarn along a constellation of vertical waist-high poles positioned on stage, with red yarn bound around her knees and coiled around her neck. Restricted by the yarn Kawita slid and writhed on the floor to each post and negotiated the yarn with her toes to unhook or attach the yarn before pushing off to the next post. Her arduous passage across the stage was somehow equally repetitive, and entropic: For sections of the performance Kawita worked across an area threading the yarn across the posts, to then partially undo the work that she had made.

This newly commissioned work is also the first collaboration between Kawita, and Pat Pataranutaporn from Fluid Interface at MIT Media Lab who developed the two Artificial Intelligence (AI) images that mimic Kawita’s appearance, gestures, and voice. Programmed by Pat to harvest online content connected to Kawita’s public profile, the AI images (or Kawitashes) composed and performed discussions around freedom, oppression, capitalism, neoliberalism, labour and exploitation – all of which are pervading themes throughout Kawita’s practice. Through the performance the Kawitashes engaged in a combative and dialectic discussion alongside the stage in two 3.5 x 2 metre screens. 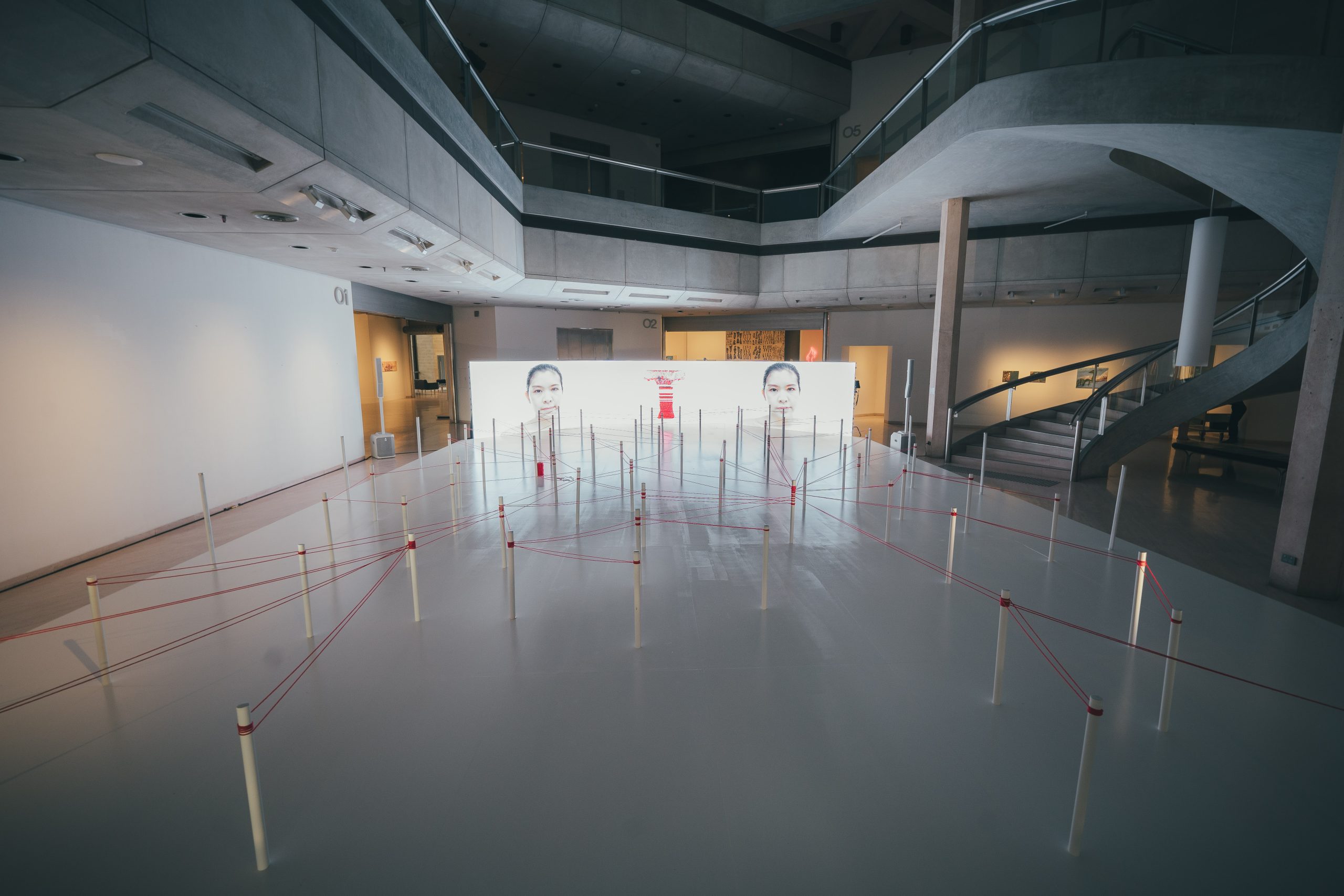 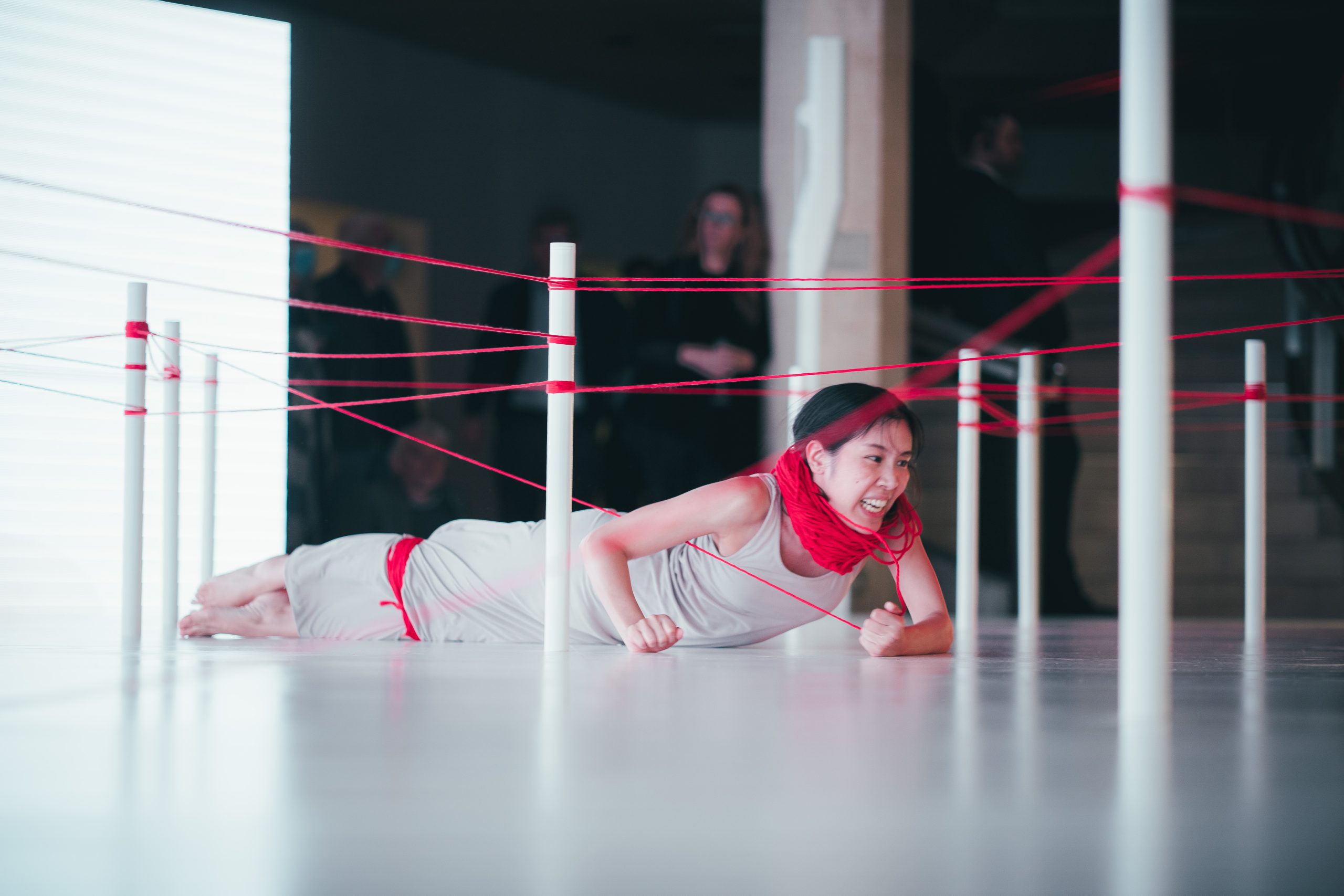 Kawitash 1: But what if you’re wrong. What if there’s nothing beyond the spinning wheel? Then what will you do?

Kawitash 2: I believe that consciousness exists beyond the spinning wheel of life. It’s a state of being that’s pure and free untethered by the whims of this world.

Kawitash 1: But how can you be sure? To me consciousness is just an illusion created by the spinning wheel. It’s the never-ending cycle that keeps us trapped in its relentless cycle.

Kawitash 2: There’s something more to life than just this endless cycle of suffering. I know it exists because I’ve seen it myself.

Kawita’s passage across the stage was largely unchoreographed and each movement was made in direct response to the flow of conversation between the Kawitashes. Her gestures of ravelling and unravelling at times obeyed one Kawitash for whom freedom and creative expression are futile pursuits; or responded to the other Kawitash that is optimistic about the future of human-machine relations in neoliberal societies.  It seemed that Kawita was desperately waiting for deliberation to unfold before she moved to the next post to ravel or unravel her yearn – seeking, working, interpreting, obeying, and becoming more desperate over the course of the performance. These cybernetic alter egos cycled through discussions of freedom, oppression, consciousness, free will and capitalism – each holding their stance and never meeting and coming to a resolution. Together they provided flickers of insight, and evaluation but the conversation never moved forward or arrived at consensus. Their dialogue mimicked an organic conversation but fell short from hitting key points and turns that are usually made.

There are clearly orchestrated divisions of labour and power between Kawita and the Kawitashes: She describes herself as the ‘suffering subject’ that is at the whim of their deliberations – much like a labourer decoding the cryptic messages directed by bureaucratic middle management.[1] This hierarchy of power invites viewers to consider technology as something that is oppressive, rather than being a set of practices that we adopt, or apparatuses that we create to extend our bodies and capacity to thrive. Instead, technology is something that through our interactions with it, diminishes our humanity. Mental Machine therefore confronts viewers to consider dynamics of power and class in in increasingly automated workforces.

Between the Kawitash screens was a video of an earlier performance by Kawita titled Knit II, 2021, which documented Kawita working yarn between a large rectangular loom that slowly pulls her weaving away from her. In Knit II Kawita frantically works to produce more than what is taken by the apparatus. Situated between the Kawitashes, Knit II provides a visual connection to Kawita’s earlier practice which has been predominantly focused on critiquing unethical and inequitable conditions of textile industries in a late capitalist world order.

In many ways Kawita’s work participates in feminist critiques of labour in late capitalism – a rich subject of contemporary art particularly since the 1960s. Of more recent note Cao Fei (Whose Utopia 2006 and Asia One 2018) and Mika Rottenberg (NoNoseKnows (Artist Variant) 2015) question the absurdity of global capitalist systems which are unsustainable, unregulated, that expect (mostly female) labourers to work relentlessly under extreme and surreal conditions. And like Kawita, Janine Antoni (Loving Care 1993) and Mierle Laderman Ukeles (Proposal for an exhibition: ‘CARE’ 1969; Maintenance Art works 1968-2016) are renown for pushing their bodies in repetitive ritualistic ways while mimicking and subverting performances of domestic chores to critique the feminisation of labour in public and private spheres. These artists, including Kawita are also deeply engaged with questions of labour, excess and the circulation of goods, and the pressures that automation and efficiency put the body under.

More specifically, a pervading question throughout Kawita’s artistic career has been around what makes us human, and what happens to our subjectivity and agency when we perform like machines. Mental Machine is a departure from Kawita’s previous works such as Knit II in several ways as there is now a focus on the changing perceptions of the individual in an increasingly automated existence. While previously in The Spinning Wheel, 2018; Shuttle, 2018; and Knit, 2019; Kawita was focused on critiques of power and patriarchy, and representations of the labouring body in the textile industries, Mental Machine marks a pivot in focus towards emerging machinations of power in contemporary global capitalism that we experience as increasingly porous human-machine relations in the workforce. 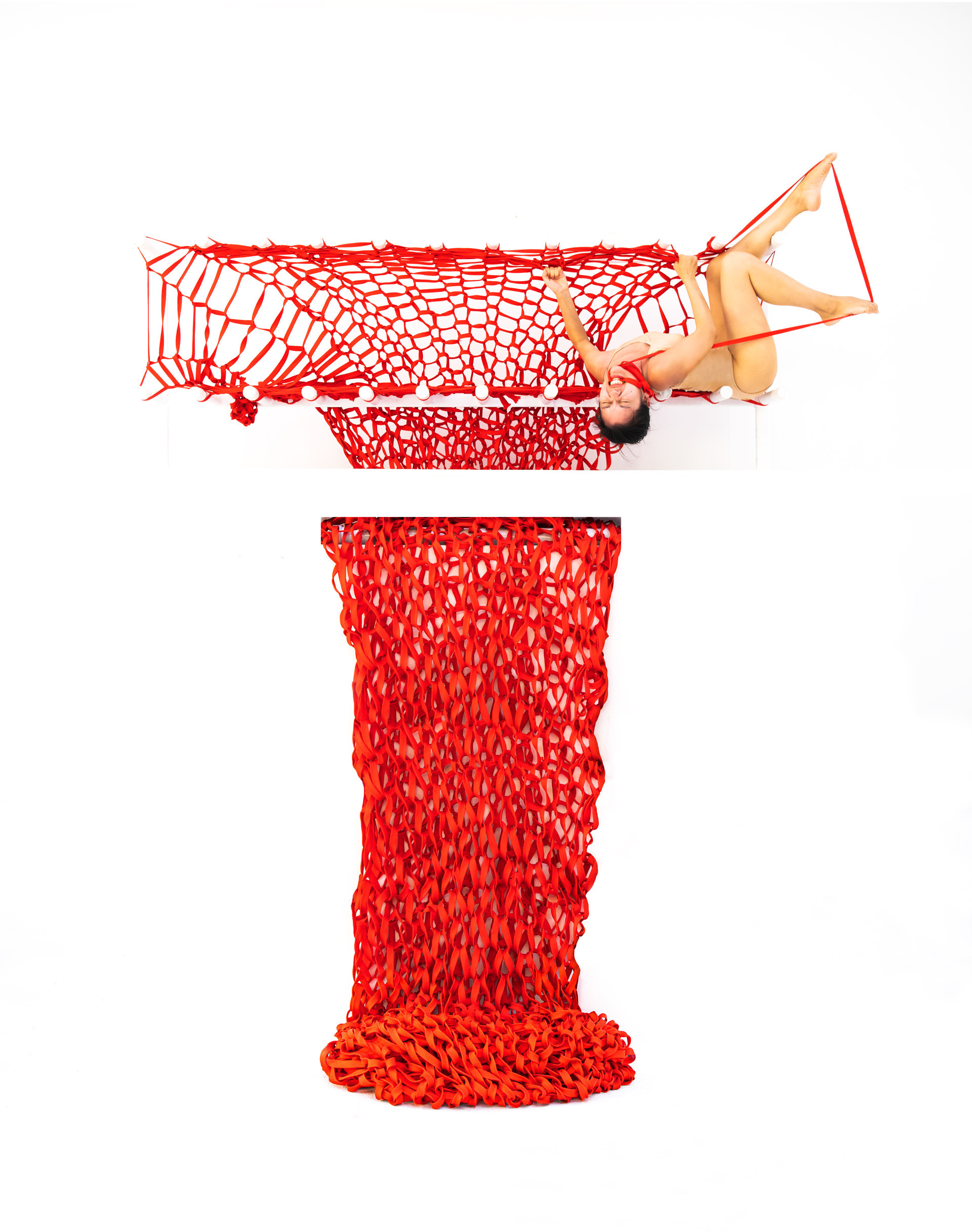 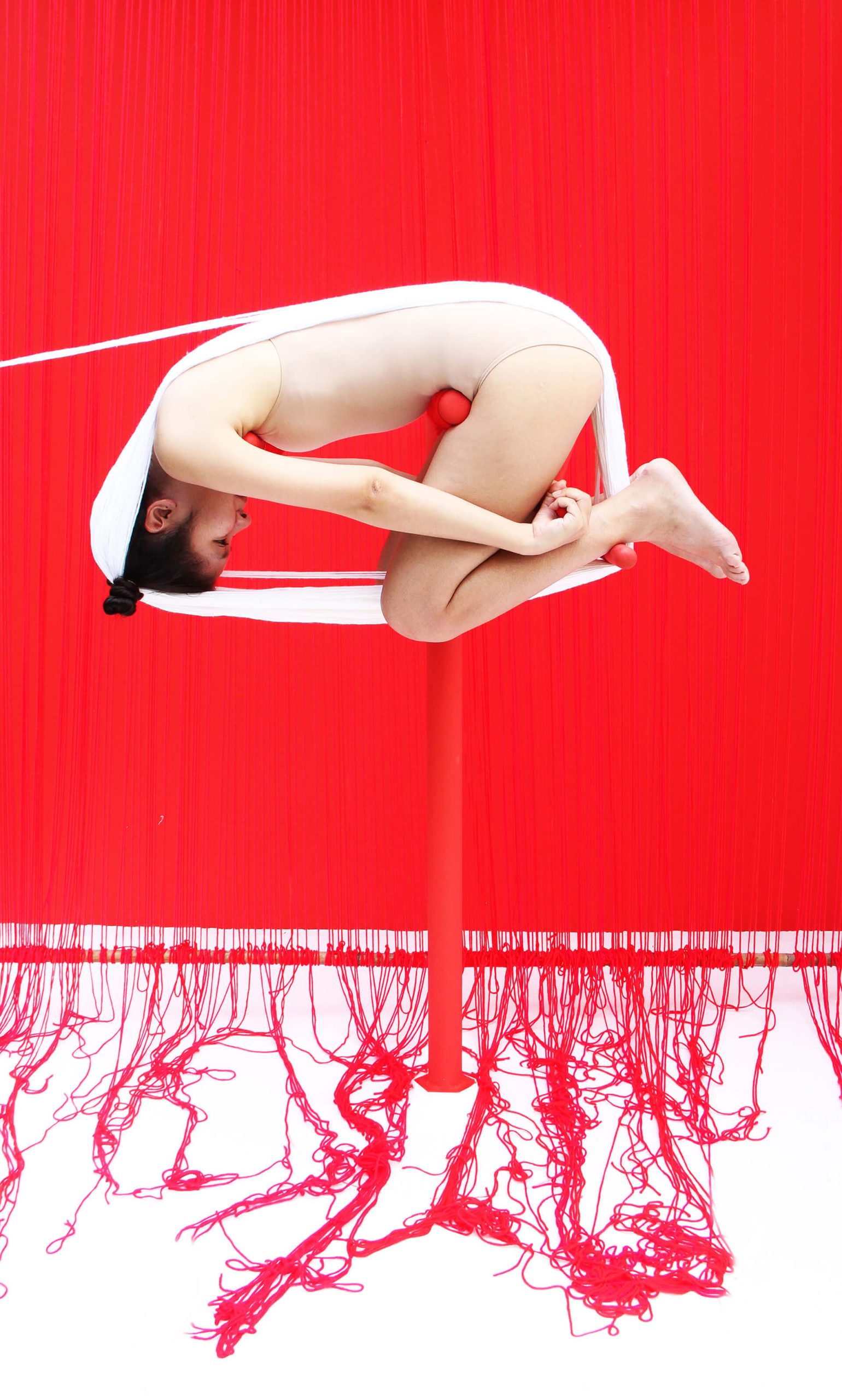 Kawita is also interested in the binary representations that human-machine relations often amplify. For instance, in Mental Machine Kawita performs as a subservient floor bound weaver responding to two ethereal and composed cybernetic alter egos. Kawita further positions the body as subservient and fallible by comparison to technology. When describing her practice Kawita often uses her body as a tool for objectification and utility, which over the course of her performances becomes more machine like: ‘The process of transforming myself into a tool and becoming a machine,’ she says, ‘is putting myself within a meditative stage, to take the mind out of the body.’ Through her repetitive work she ‘realised the true understanding of what being treated as machine is like, even if it was only a short glimpse.’[2]

In the above reflections Kawita regards herself and her body as malleable; a body capable of transformation, and through repetitive action and work, she has the capacity to lose a sense of self. Throughout Mental Machine Kawita takes on the role of the subservient worker that reacts to the looping back and forth conversation between the AI images. Kawita is interested in mimicking aspects of labour where bureaucratic directives are decoded and executed by workers. Other artists have shown similar approaches to human-machine relations: For instance, Stelarc often plays into anxieties around our corporeal inferiority and dependence on technology to the point that ‘the body is obsolete’ and our own free will comes under question.[3] Similarly, Kawita is interested in the malleability of the human body, which becomes more machine-like through repetitive work. However, the transformation that she undergoes in her performances are used to question peoples’ capacity to hold onto ideas around free will, human essence, and agency. In Mental Machine, Kawita arranges specific power dynamics between the Kawitashes and her performance, which plays into mainstream anxieties around the loss of control of the body when under the orders determined by technology: Kawita’s autonomy and free will is cornered and she is at the whim of their dialectic conversation. Over time Kawita’s body gives in to duration, each gesture is more arduous than the previous one meanwhile the Kawitashes maintain their steadfast composure. This dynamic reiterates many mainstream impressions around the perception of technology in relation to human freedom and autonomy.

Similar dichotomies around human-machine relations in the workforce continue to perpetuate contemporary pop culture and advertising. We are often presented with news headlines about robots stealing our jobs, algorithms understanding our desires even better than ourselves, and robotics becoming highly trained artists. Giving in to these fears perpetuates ideas around needing to protect a sense of core humanity, free will and autonomy, which is threatened by mechanical and digital technologies, and further stokes anxieties that humans will be overpowered, transform, lose ourselves and inevitably become obsolete.

This technologically deterministic and anxious position is in dire need of review. In Women and the Machine Julie Wosk reminds us that ‘One of the central metaphors to emerge in the nineteenth-century critiques of industrialization was that of the industrial worker as both slave and automaton, men and women whose identities and actions had become as rote and mechanistic as the machinery they used.’[4] Through Wosk we can see that the tensions between human and machine is a historical by-product of the industrial revolution, and not technology threatening our free will at all – a perception that many contemporary artists are interested in currently unravelling.[5] 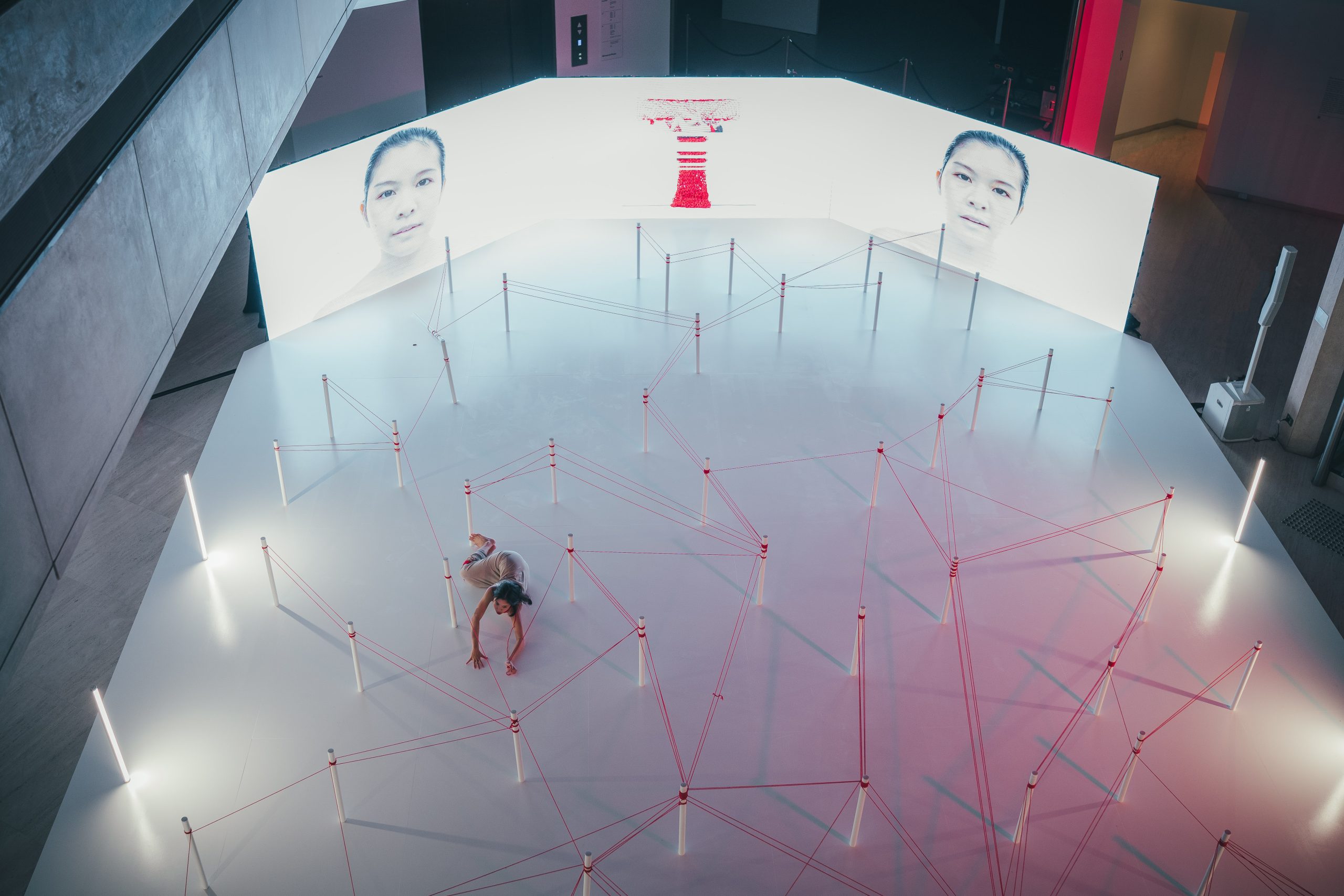 A particularly potent aspect of Mental Machine is how the performance holds competing tensions within it. Rather than seeing Kawita ‘lose’ a sense of self and humanity through her endurance performances, we can also see that Mental Machine reiterates the ongoing and historical imaginaries around human-machine relations. The fact that the Kawitashes are comprised of online information about Kawita, reaffirms that any loss of self is also a redundant quest. Of course, many of us know this and have been guided by prominent cultural theorists like Donna Haraway (cyborg), Mark Poster (posthuman) and others to see that central to these anxieties is the idea that it is capitalism that dehumanises us, rather than technology itself.[6] Perhaps what might be more alarming is feeling that any sense of obsolescence might be quickly compensated for by acquiring more gadgets to fill the void and distract us, pushing us to be more efficient and more productive. By playing out these social anxieties around the role of technology in the workplace, Kawita also highlights how the extractive nature of labour will only intensify in a late capitalist order. With the increasing use of AI, algorithms and robotic technologies, the dynamics of class segregation, power and exploitation will be reconfigured as we continue to grapple with the tools we have created and their implications for the human and more-than-human world.

Dr Christina Chau is an arts writer and an academic at Curtin University. She specialises in contemporary art theory and history, kineticism, and media art histories, and her book is titled ‘Movement, Time, Technology and Art’. 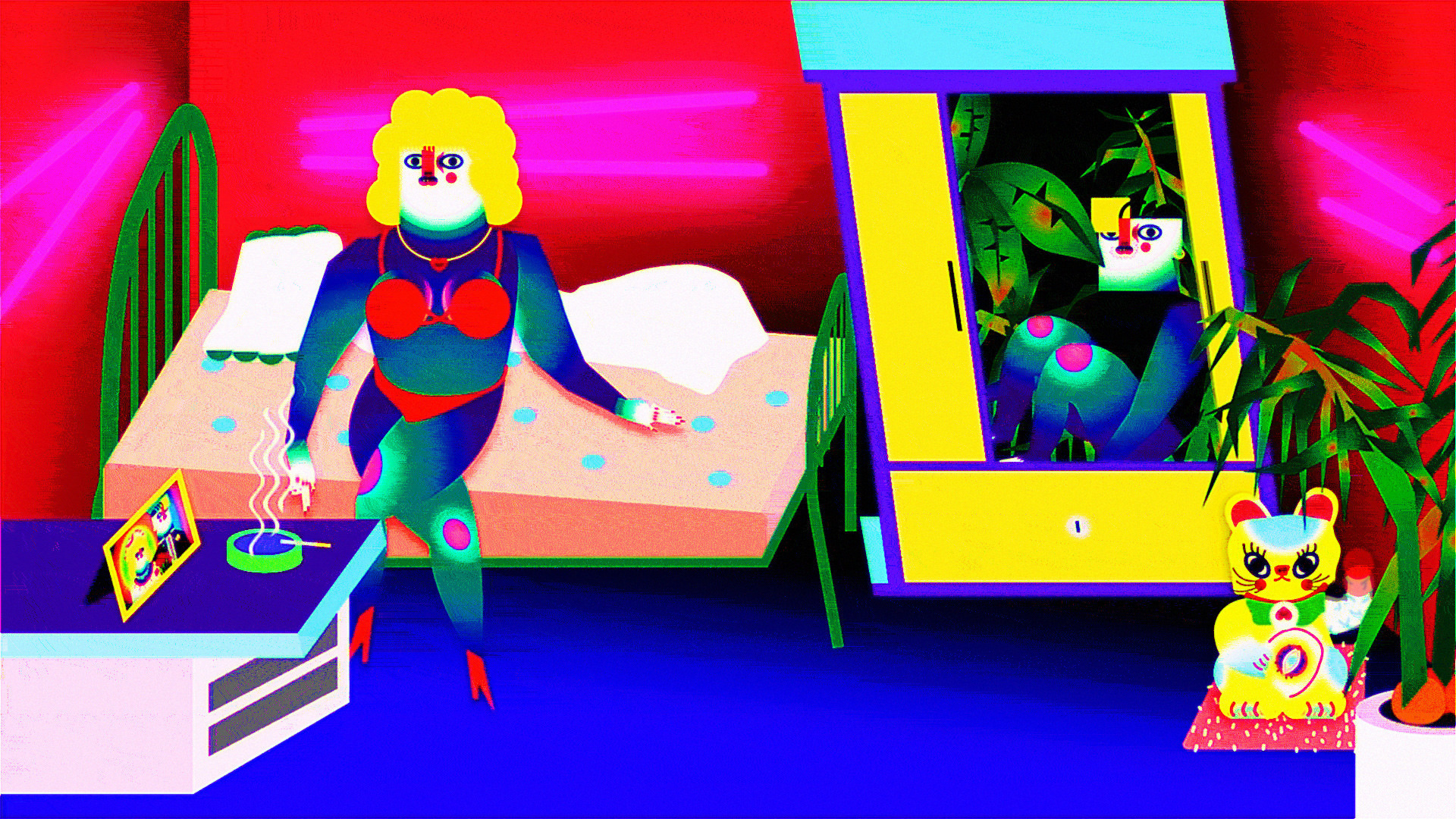 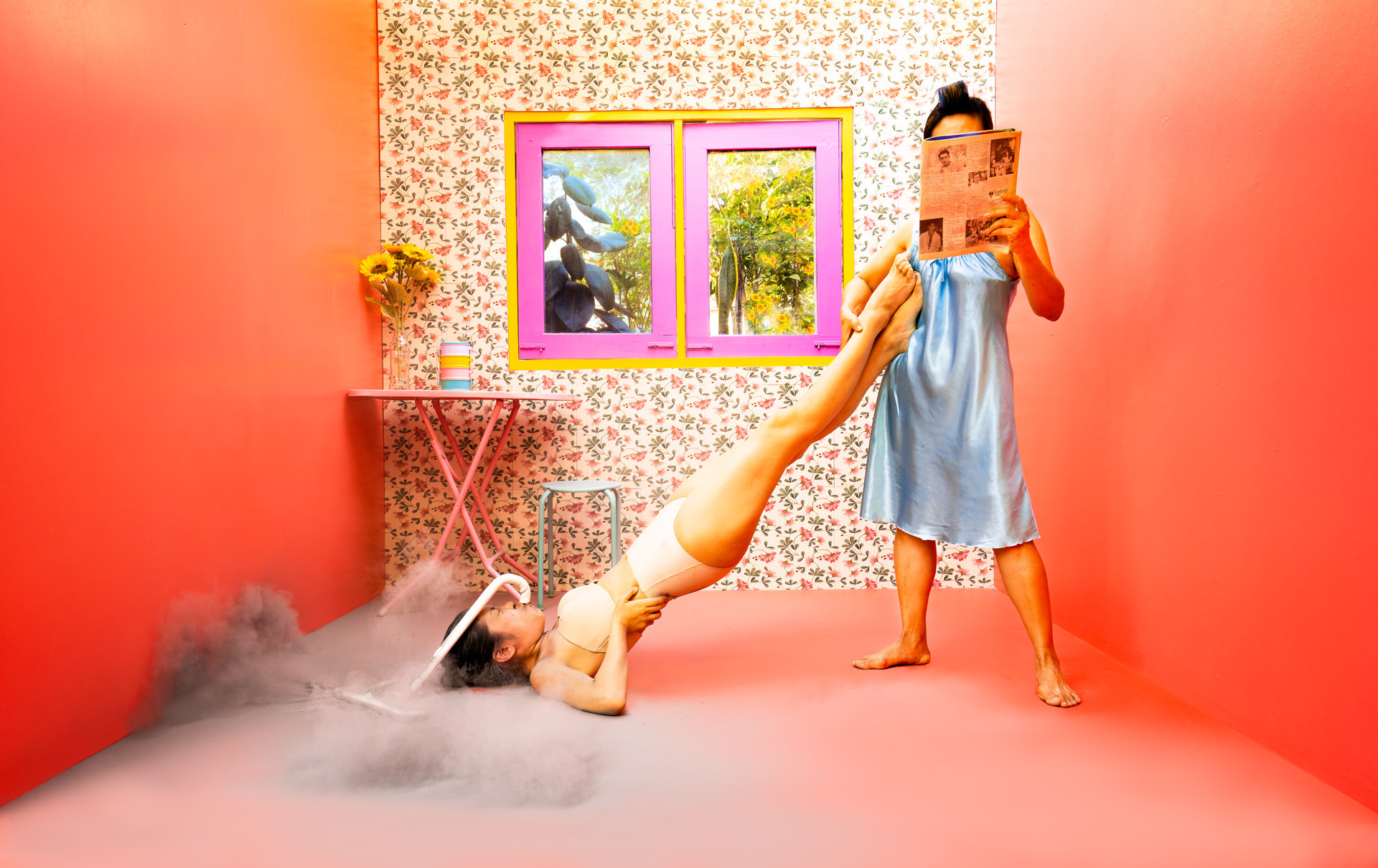